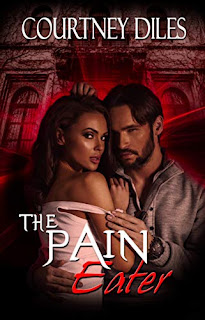 Roxie Maeda is a college senior who hears voices in her head. When she first sees the demonic creature haunting her crush, she blows it off as a hallucination, but then it shows up in her Psych class, visible to everyone.

Its appearance triggers a police search of the campus, which reveals a bag of guns right outside the classroom. Someone was planning to shoot up the school. Over time, the creature discloses that he is a pain eater—a cursed, undead human who eats pain demons that arise from injuries, taking the pain into himself.

His selflessness sways her, and she befriends him only to fall in love. Together, they resolve to break his curse and save Prometheus University from its unknown attacker.

Roxie deals with her mental illness where she hears voices along with other problems. Her father is an alcoholic so he's of no help to her.

Teddy is Roxie's neighbor and he just came back home after losing a leg in the Marines. No one but Roxie knows about his prosthesis and for now he wants to keep it that way.

Roxie began seeing a figure all in black, even his head was covered. But he would open his mouth and scream for no reason. She felt like it was a hallucination until everyone in her classroom saw it too. The figure pops up out of no where and started leaving her little messages that he wasn't going to hurt her. He even gave her a letter explaining that he was a pain eater, a thing that eats pain demons who cause humans pain. Essentially the pain eater took away the pain that the pain demons gave them and the dark figure's name was Eli. He went on to tell her that he made himself visible because someone in the classroom had been planning an attack that could still happen.

Eli becomes her friend after she experiences a tragedy and has no one else to turn to for support. They spend a lot of time together and she finds out a lot about him and the others like him. There are other kinds of creatures too. Some that give you adrenaline, some that take your memories and some that make you hear voices, just to name a few.

Eli and Roxie are there for each other when bad things keep happening and Eli has to keep eating the pain that others are feeling because of the bad things that happen. At first I thought that Teddy and Roxie were going to be a couple but they just end up being friends while Eli and Roxie get a lot closer and start to have feelings for one another. It was strange to have a human have feelings for what is described several times as a demon or looking like a monster. When Eli does reveal himself to a couple of people, their reaction is enough to make me realize that he must look really terrifying. So to have Roxie fall for him, he must have a really big heart which he does.

Every time I thought I knew where this story was going, a new twist would be thrown in to show me how wrong I was. That made this book even better and more exciting. I never knew what was going to happen next or who the bad guy was at her school until it was revealed. I was on the edge of my seat with this one. This was a different kind of paranormal romance with characters that I've never read about before which I seriously liked. The characters were original, the romance was sweet and the action and danger was exciting.

If you've ever read a book that surprised you in a good way and you just want to tell everyone to read it because you can't put into words how good it was, this was one of those books for me.

Disclosure: I received an ARC of this book via NetGalley but all thoughts and opinions are my own.
Posted by Mary Kirkland at 12:00 AM