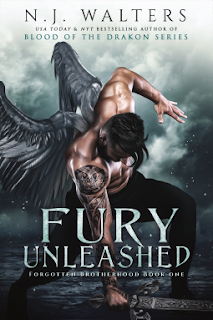 Maccus Fury, a fallen angel, is trying hard to keep his sanity. Seems being an assassin might be catching up with him. Now, Heaven, or Hell, has sent a beautiful assassin to kill him. Lovely. She’s pretending to seduce him, and he’s okay with that. She’s smart and snarky—but she has no idea what she’s walked into. And he’s more than peeved that they only sent one person. They’re going to need an army if they want him dead.

Morrigan Quill is one of Hell’s bounty hunters. She sold her soul to keep her sister safe, and now she’s working off her contract by catching bad guys and dragging them back to hell. When Lucifer makes her a new offer––that’s definitely too good to be true—she can’t say no. All she has to do is kill a powerful and crazy-hot fallen angel, who will totally kick her ass in battle.

Maccus is a fallen angel and an assassin. But when an angel comes and tries to hire him to kill a human, he refuses but is still curious why he wants her dead.

Morrigan is one of Hell's bounty hunters. She traded herself for 25 years so that her younger sister could have a safe life. But when Lucifer himself comes to her and gives her a bounty and tells her to kill Maccus, she knows this is no normal demon bounty.

Maccus runs into Morrigan when she's chasing after a demon. The instant attraction they feel for each other isn't smothered by the shocking revelation that each feels when they realize that they other is someone they are supposed to kill. Neither of them trust each other at first but after a night of wild, hot, sex they sit and talk trying to figure out why Lucifer and archangel Gabriel want them dead.

My heart broke for both of them time and time again. Not only for what they had gone through but for what I knew was coming and I had no doubt that it would be messy, hard and hurtful. The truth of what they had both been through was horrifying. They had both been in hell, tortured and now not only could they barely trust each other but they knew that each other was all they had.

Trying to figure out why the archangel Gabriel and Lucifer are in essence working together to get them to kill each other was frustrating. But when the truth's come out, the betrayals come to the surface and they both find out what's really going on, it was crazy. But it was wonderful to see how this ended because not only did it bring tears to my eyes but I'm really looking forward to finding out what happens next. I can't say enough good things about this book. If you like fallen angels and demons then you need to read this book...right now!