Review: Of Flame and Fury by Cecy Robson 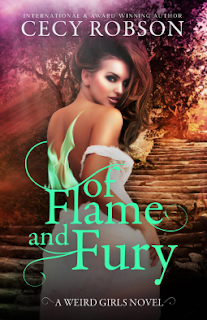 Taran Wird, the loudmouth mistress of flame and lightning, didn’t want to attend the formal gathering of the supernatural elite. She did so only to help unite the supreme beings in attendance in one common goal: protecting Taran’s sister, Celia.

Celia is pregnant with alpha werewolf Aric Connor’s child, the same child prophesized to save the world from uprising evil. Evil wants this child dead before he is born and, more importantly, before he can grow strong enough to stop it.

Taran and her werewolf lover, Gemini, put plans in place to protect Celia. Master Vampire Misha Aleksandr and his clan also swear their allegiance to Celia and vow to keep her from harm. The witches even cast protection spells around the manor to curse anyone with malintent who enters. Nothing was supposed to go wrong, except everything did.

Creatures that shouldn’t exist stalk the grounds and invade the premises, and every curse meant to shield the guests turns against them. No one counted on the powerful being who arrived uninvited. But he’s here, manipulating the magic enclosing the estate to work in his favor.

As body counts rise and allies become enemies, chances are Celia won’t survive the night. But evil never counted on how hard Taran Wird would fight, even at the expense of her life.

Taran, her sisters all have one goal, make sure their sister Celia is safe. Of course Celia's mate, Aric also wants to make sure that she and their unborn child is safe. So they attend a social gathering for paranormals in the hopes to all agree to get along but things go from bad to worst when they all get together. Something evil is after Celia and her unborn child and it nearly gets to her before they can save her.

Taran is a fighter and so she doesn't give up even when it looks like the odds are against her. I loved Taran's mate, Gemini and Celia's mate, Aric. They are both two badass paranormals. Aric shows just how powerful he's become, now the most powerful were there is. But Taran also shows how much she's grown and how much power she wield's.

But in fighting all the creatures that are thrown at them they really band together and get the job done. I know I held my breath a few times because I thought something terrible had happened but it wasn't as bad as I thought it was for the most part.

This series had been really good even though I haven't read all of the books so far. But I think that Emme and Bren will have their own book really soon with all the drama between them in this book and I'm looking forward to it.

And then that ending. Wow, and I mean the very ending, that last sentence. I'm looking forward to the next book.