Review: Between Ice and frost by Milly Taiden 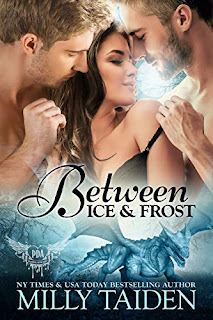 Raven Casino loves solving mysteries. So it was only natural that she take to the Alaskan wild to find her missing friend, Juliet. She is ready to take on the world to figure out where Juliet could be. But she wasn’t expecting to meet not one, but two hunks in the icy small town of Antler, Alaska. These two were so sexy they radiated enough heat to melt the polar ice caps. Hot damn!

Frost and Ice were hired to make sure Raven was safe, but the minute they saw her, they knew she was the missing piece to their triad. Now to explain to her that she was meant to be with them both. Shared by both. And not freak her out. That was going to be harder than stopping her from getting herself killed in their little town.

There’s something going on in Antler and Raven’s out to find out what they’re hiding. With a missing friend and clues at every corner she turns, she’s taking this bull by the horns. The fantasies with Frost and Ice are a side effect of being so close to them, but she’d get over it. Right? Uh… When she solves a puzzle that’s bigger than she realized, it’s going to take two very alpha dragons to keep her alive long enough to get her freak on.

Reader's Note: Like all other Milly books, this is DIRRRRTY, Fun and Action-packed. If you're not into menage, skip this sexy triad. But if you think you can handle these dragons, turn to page one. Enjoy!

Raven goes in search of her best friend in Alaska but once she gets there instead of her friend she finds two large, deliciously hot men ready to help her search for her fiend, Juliet.

While Raven, Ice and Frost go looking in the last place they knew she was, they also find signs that something is wrong because Juliet was doing tests on different things in the area. So maybe someone who didn't want the test results to get out found out what she was doing and kidnapped her. So while looking for Juliet, Raven falls hard and fast for Ice and frost who turn out to be dragon shifters. They are old and have been waiting for their mate for a long time so when they realize Raven is their mate, they don't waste time and Raven falls head over heels for them. I don't usually mind insta-love but she did seem to fall into bed with them both a little too easily for me. I mean she doesn't know them at all and she's just gonna have a threesome?

There was something about Ice and Frost's personalities that I didn't care for. They were a little overbearing and pushy, at least to me but Raven pushed back so that was good.

There's something making the people of this town in Alaska sick and Raven thinks Juliet might have found out what it is and it got her in trouble. Thankfully Frost and Ice are there when Raven finds herself in danger and figures out what's really going on.

This was a fun, quick read but it wasn't my favorite from this author.