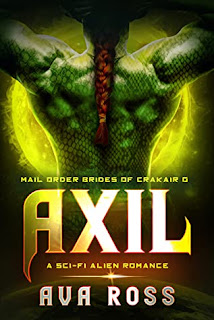 Book Description
En route to meeting her alien fiancé for the first time, Julia gets lost inside the lower corridors of the alien starship. When she slams into a grease-spattered alien and he grabs her, she does what any self-respecting Earth girl would do—she stabs him. He flings her over her his shoulder, hauls her to his room, and tosses her onto his bed. Then he kisses her.
No puny Earth female should dare to assault him, yet this one challenges him at every turn. He wants her, and he’s used to taking whatever he wants. When she signals for him to kiss her, what’s a hot-blooded alien to do? He climbs over her and captures her mouth with his own.
An Earth woman and an alien male collide on a starship bound for the planet Crakair. Will the seven foot tall mass of pissed off alien release her or make her his bride?
Axil is book zero in the Mail Order Brides of Crakair Series. This standalone, novella-length story has on-the-page heat, a guaranteed happily ever after, no cheating, and no cliffhanger.
My Review
I received this book for free after signing up for the authors newsletter.
Julia meets her intended mate all by accident after she gets lost on the alien spaceship. When he grabs for her, she stabs him and he lifts her over his shoulder like a sack of potatoes and carries her back to his room. She thinks he's some sort of mechanic because he has oil on him so she's shocked when she finds out his identity. She and Axil both have translators implanted behind their ears but hers hasn't quite started working yet while his is working just fine and he knows exactly what she's saying to him.
Axil knows exactly who she is when she stumbles into him in the hallway. He never meant for things to go quite as far as they did but he found her quite amusing since she had no idea he could understand everything she was saying to herself.
They fall for each other really fast even though they're supposed to court for a year, they decide to speed things up and head off for a short trip to another planet to get to know each other better. Not everyone is agreeable to this and they show their displeasure about it, really aggravating Axil. But things don't go according to plan and they find themselves in danger for a while where Julia shows that she's not just some fragile human.
I really liked this story and I loved Axil's personality. These two were made for each other and now I'm looking forward to reading more of this series.
I give this book 4 out of 5 stars.
Posted by Mary Kirkland at 12:00 AM