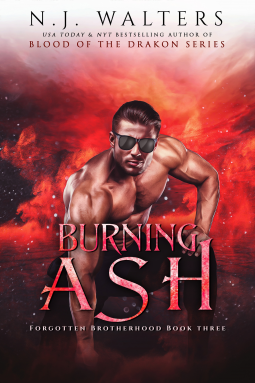 Book Description
No one is more surprised than Asher, one of the oldest vampires on Earth, that he's attracted to vamp hunter Jo Radcliffe. She's smart, a talented slayer, and she's gorgeous. Something about her pulls at him, like no one ever has before. For a man, whose name strikes fear in everyone—this is something new and intriguing. And quite possibly deadly, if she discovers his secret.
Jo has two things in common with the handsome Asher—they are both slayers and someone is messing with them in a very-much-trying-to-kill-them way. She's not so happy about joining forces with a dude she doesn't know. But he's sexy as hell and really good at his job as one of the Forgotten Brotherhood, whose business it is to execute misbehaving paranormals.
She knows she's bait in a larger plot to harm Asher and the Brotherhood. And there is nothing he won't do, no line he won't cross, to keep her safe—which may be the weakness that destroys them both.
My Review
This is the third book in the Forgotten Brotherhood series and after really loving the first two books I was excited to read this one.
Asher (Ash) gets an anonymous email telling him that a vampire is killing people and while he doesn't usually check these things out, he does this time. While he hides in the shadows watching the vampire, a hunter walks in and attacks the vampire. Asher isn't your average vampire since he's thousands of years old and very powerful. Things don't usually intrigue him after having lived so long but the female hunter sure grabbed his attention right away. Asher is a member of the Forgotten Brotherhood and he gets sent out to deal with paranormals that cause problems and break rules.
Jo is a vampire hunter and wants all of them eliminated. She got the same anonymous email that Ash did and that's how they met. Jo hates vampires but Asher tried to help her kill the vampire that was killing innocent people so they end up hanging out a little bit.
These two are polar opposites but little by little they realize that there's something between them. Ash doesn't understand why he feels such a pull to protect her but there's no fighting it or the attraction he feels for her. Jo doesn't realize right way that he's a vampire because he can walk in the sun for one thing and he eats regular human food. I wasn't sure that a vampire hunter and a vampire could have a strong relationship but once Jo realizes that they are fighting for the same thing, she let's her guard down a little.
Jo can kick as much bad guy butt as Ash and I loved how strong she is. We get to see some of the people from the first book which I loved. It's always nice to see how the people in the previous books are doing. There's a little bit of a twist and a little danger but Ash wasn't going to let anything happen to her if he could help it. I like that we get someone new in this book and I really hope we see more of him soon because he's intriguing. Once again I ended up loving another book in this series.
I give this book 5 out of 5 stars.
Disclosure: I was given an ARC of this book via NetGalley but all thoughts and opinions are my own.
Posted by Mary Kirkland at 12:00 AM