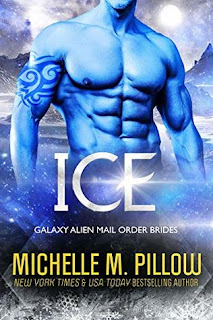 Book Description
She's hot. She's sexy. She's everything a lonely alien could want... except for the part where she captures him and puts him in a cage.
Alpha male alien Izotz (aka Ice Storm Chaos) isn't one for space exploration. He finds enough action fighting for survival on his frozen tundra of a home world. When the promises of Galaxy Alien Mail Order Brides tempt his brothers into signing up for a trip to Earth, he's hard-pressed to say no to the fantasy. Not many remain on the planet of Sintaz, and this may be his only chance to find a mate to warm the freezing nights. What he hadn't planned on was the fact the woman of his dreams would want to capture him and put him in a cage.
When Elle took the mercenary job hunting UFOs, she thought it would be an easy paycheck from an eccentric, crazy man. Little did she know extraterrestrials were real and freaking sexy to boot. If she can ignore the blue skin, surely this hunky alien can overlook the fact she's the reason he's now her boss' science experiment.
My Review
The three brothers live alone on an ice covered planet, so when they get the chance to come to Earth to find brides, they jump at the chance. But Galaxy Alien Mail Order Brides aren't completely upfront about how not all Earth people know about aliens. The translator about the brides and people of Earth isn't exactly translated correctly which makes things a little funny and confusing for them once they get here.
Once here though, a group of people kidnap Ice and want to keep him and do experiments on him but Elle finds him sexy and helps him escape before the evil doctor can do much to hurt him. She doesn't know right away that Ice can understand her and speak her language but once he trusts her enough to let her know it, they seems to get along really well. They are very attracted to one another and because of a miscommunication, he thinks she has chosen him as her boyfriend and then mate before she actually has.
Once he escapes with Elle, he has to find his brothers and get back to their ship so they can get off Earth and go back to their planet but he doesn't want to leave Elle. I really liked how this book ended because I wasn't sure what Elle was going to do and I wasn't sure Elle would be happy on a cold ice planet. I really liked Ice and his brothers and hope to read their stories at some point as well.
I give this book 5 out of 5 stars.
Posted by Mary Kirkland at 12:00 AM