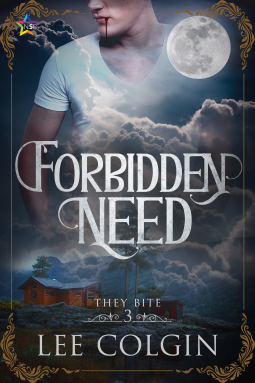 Book Description
As Rudy adapts to life in a new town, he lays eyes on a man whose very presence steals his heart. The man is bewitching. Bewitching…and grumpy.
Samuel has no interest in the coyote shifter who’s been following him around like a lovesick pup, even if he is adorable. Adorable…and persistent.
Born a vampire before the Great Wars, Samuel’s had plenty of time to make enemies. If he can’t discover and kill the one who’s been stalking him, it could be Rudy who pays the price. Samuel doesn’t do relationships, and he won’t bend the rules for Rudy, but that doesn’t mean he wants the coyote hurt. Stuck together as Samuel plots revenge, Rudy finally has his chance to win over his mate.
Can they harness the power of their fated bond, or will Samuel’s dark past overcome the future they’ve yet to claim?
My Review
This is the third book in the They Bite series and since I read the first two books and liked them, I figured I would read this one as well and I'm glad I did.
In the last book Samuel really had me intrigued because he's a lethal vampire. He's called on when uncomfortable things need to be done. He's a loner but has a couple of long time friends that he's close with but even they don't know all of his secrets.
Rudy is new to town but soon spots Samuel in a bar he tries to ask him out but is flatly turned down. But that doesn't stop Rudy for long because he's persistent. But Samuel doesn't date and when we see into his past, it's all too obvious why he never gave dating a second chance.
Rudy knows that Samuel is his mate but Samuel refuses to accept it or even acknowledge Rudy most of the time. But Rudy isn't about to give up that easy and goes about being in the same places that Samuel frequents. Rudy even gets some help from one of Samuel's friends. Samuel is a very closed off vampire and he has every right to be but when Rudy runs into some trouble, Samuel can't stop the alpha male in him from coming out and coming to his rescue.
Just when these two are finding each other, a terrible vampire from Samuel's past finds him and puts both their lives in danger. Now they have to find a way to stay safe and stop the villain from winning.
This was such a good story but I really liked the first two stories in this series as well so I'm not surprised. I will gladly keep reading this series since the books are so good.
I give this book 5 out of 5 stars.
Disclosure: I was given an ARC of this book via NetGalley but all thoughts and opinions are my own.
Posted by Mary Kirkland at 12:00 AM