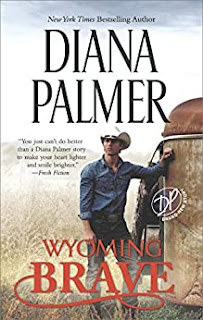 Book Description
The Wyoming men are back! In their quest for true love on the range, are these ranchers bold enough to open their hearts to the women under their protection?
Ren Colter may own an enormous ranch in Wyoming, but he scorns his wealth. He's closed himself off since his fiancée left him months ago, so he's shocked when he allows Meredith Grayling to stay with him. He tells himself it's only to protect the blonde beauty from a stalker, but Ren's alpha instincts soon kick in.
The last thing Merrie wants is a devastatingly handsome man like Ren lurking around her. He's too experienced, too appealing for her already shot nerves. What she needs is just to get away from it all: the man haunting her waking dreams and the one hunting her like an animal. But no woman escapes this Colter cowboy!
My Review
Merrie's friend Randall brought her to stay and his and his brother's ranch. Randall's brother, Ren is also there and he really doesn't like Merrie being there because he hates women. Ren is bitter after he is cheated on by his ex fiance who just wanted him for his money so now he sees all women in the same light.
Merrie has had a really hard life because her father used to beat she and her sister. It isn't until Merrie freaks out when Ren takes his belt off to adjust it that Ren finally sees past his hate and realizes that Merrie isn't an awful person. The fact that Merrie is able to get close to a horse that was beaten and had hurt any of the cowboys that came close to it is just another reason Ren is seeing her differently.
Ren didn't know it at first but Merrie was hiding from a dangerous man who was out to kill her and it isn't until she uses her credit card to buy something that someone is able to track her down. But just as Ren and Merrie are getting closer, a misunderstanding comes between them and she leaves his ranch to go back home with her sister. Ren knows he made a mistake but doesn't think that there's anything he can do about it until Merrie is hurt and he decides to come see her and her family.
Ren realizes how much he cares for her and can only hope that she'll be ok and maybe forgive him for being so dumb. Merrie forms an unlikely friendship with someone that ultimately is the reason the threat to her goes away.
I like how this one ended and if you've been reading my reviews, you already know that I love Diana Palmer.
I give this book 5 out of 5 stars.
Posted by Mary Kirkland at 12:00 AM