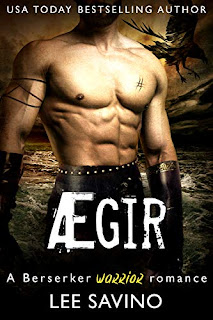 Book Description
The only daughter of an Irish chieftain has one purpose and one alone: marry well. But on the eve of my wedding, I’m stolen away on a ghostly ship by a warrior trapped in time.
Legend tells of a Sea Wolf who must sail the northern seas until he finds the woman who can break his curse and lead him home.
The legend is real. The Sea Wolf has come for me.
Ægir (a Berserker novella) is a standalone fantasy romance novella starring a huge dominant warrior and the woman he will claim as his own. Formerly titled The Sea Wolf, it was available for a few months in the Pirates, Passion and Plunder boxset.
My Review
Muireann is on a little boat about to go to her intended and get married. She doesn't even like the guy she's about to marry but she has no choice or her home and family could be destroyed. She is also more than she appears which was a fun twist to see come about.
The Sea Wolf was cursed to sail the sea until he finds his mate who can lift the curse for him. He cannot set foot on land or he becomes a rampaging beast.
On the way to get married her boat is approached by a much bigger ship. The Sea Wolf and his crew take Muireann but things go wrong right from the very beginning. Not realizing that the Sea Wolf cannot die, she tries to kill him only to have him laugh at her attempt which I found funny. They find a way to communicate even though he cannot speak for some reason and she remembers a story that her mother told her and starts to believe that she belongs with him.
While this story was not without its drama and relationship problems, it also had me smiling once it got past the halfway point because the Sea Wolf really cared about her and it showed.
This story was a quick novella of just 76 pages but I really enjoyed the story and especially the ending.
I give this book 4 out of 5 stars.
Posted by Mary Kirkland at 12:00 AM