Review: A Dragon Speaks Her Name by Kira Nyte 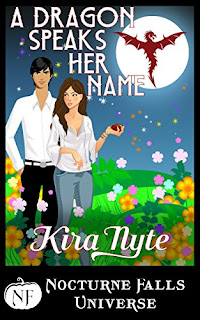 Book Description
Kaylae Drayce is convinced she’s crazy. She hears voices in her head and dreams of fiery apocalyptic wars. That’s nothing compared to the terror she feels when the only people she loves are taken from her and she’s forced to run for her life all the way to Nocturne Falls. The town promises her one of two things: Answers to her madness or a one-way ticket to an asylum.
Zareh Lutherone is shattered to discover the Firestorm dragons’ ancient enemy has found and murdered his Keeper. He is plotting his next move in preparation for another war when a beautiful stranger literally falls into his arms. He doesn’t know who she is, only that the dragon inside him demands he protect her at all costs. It doesn’t take long to understand why.
Faced with a daunting task of convincing Kaylae she isn’t crazy—she is his Keeper and lifemate—just got complicated. Their enemy is hot on their tail and will stop at nothing to get their hands on Kaylae in order to destroy the last of an ancient dragon race.
My Review
When Kaylae is told by her uncle to get in the car and run away, she does just that and follows the clues in the letters that she finds along the way to get to Nocturne Falls. She meets Zareth in Nocturne Falls and he immediately knows that there's something special about her.
As soon as Zareth realizes who Kaylae is and who she is related to, he understands his pull towards her. She is his keeper and his lifemate. A keeper is the eyes and ears of the dragon out in the world and Zareth is a dragon shifter. He's been on the run from an enemy who wants him dead and also killed Kaylae's family. The enemy would also kill her if they get the chance to do so. So he and his clan have no choice but to prepare for the enemy to make an appearance because they know they're out there trying to find all of them.
The enemy were called The Baroqueth and they wanted the dragons powers. They found out that if they killed the dragons, they could take in the dragon powers as their own. Of course one of the Baroqueth found them in Nocturne Falls and Kaylae finds herself in danger. This doesn't end on a cliffhanger but they aren't able to take out the Baroqueth so I'm sure we'll see more of them in subsequent books. I really like how this ended and I really like how Zareth and Kaylae find themselves so attracted to each other. I found this book to be a really fun one.
I give this book 4 out of 5 stars.
Posted by Mary Kirkland at 12:00 AM