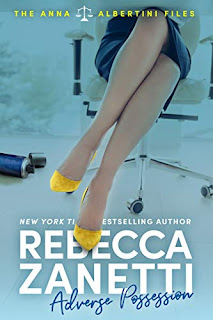 Book Description
The plural form of Nemesis is Nemeses
Anna Albertini never thought she’d have to look up the plural form of nemesis. In fact, she never thought she’d have one, much less three. But as she and her new partner try to make a go of their fledgling law firm, enemies come from every direction.
First, there’s a newspaper reporter trying to make a name for herself by dogging Anna’s every move. Second, there’s a lawyer on the opposite side of every case who just doesn’t like Anna. And third, there’s Aiden Devlin’s ex-girlfriend, who decides to descend upon the sleeping Idaho town like a bird of prey. It’s too bad she’s discovered dead…after finding herself on the wrong end of a potato gun, putting Anna top of the suspect list.
Anna deals with every day as it arrives while juggling her developing relationship with Aiden, trying to pay her rent by finding at least one client who pays, and finally by partnering with her Nonna Albertini in the world’s most chaotic plan to match-make her sister with the Elk County’s prosecuting attorney, Nick Basanelli. It’s a good thing Anna has learned to thrive in chaos.
My Review
ATF agent Aiden Devlin and his girlfriend, Anna are trying to figure out this relationship stuff while Anna was working on building up her new law office clientele with her friend, Clarke.
Anna seems to be a danger magnet though and things just keep happening to her. So when Sasha, who is also an ATF agent and ex girlfriend of Devlin's shows up, things start going south right away. Sasha goes under cover inside a motorcycle club and when she's killed a couple of the other old ladies in the club come after Anna. Then there's a bomber that escaped from custody some time back and Aiden is trying to find him to stop any more bombs from going off.
I have to say though that Anna's family is scary funny. Scary in the fact that they will jump right into a fight for Anna and I mean a fist fight. Even Anna's grandmother was willing to pull her wooden spoon out of her purse and knock some woman upside the head all the while donuts and slices of pie are flying every which way.
This is the third book in the series but the first book that I've read in this series but I tend to read out of order all the time. Zanetti knows how to write a compelling story and this one was that and more. So much was happening, so many characters to keep track of and so many twists and funny drama filled scenes that I just wanted to keep reading.
I give this book 5 out of 5 stars.
Posted by Mary Kirkland at 12:00 AM