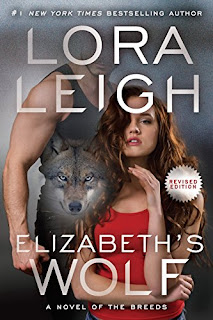 Book Description
Special-Forces solider Dash has all but given up his will to live until an innocent letter from a little girl brings him back to life. Cassie writes to him every week, strengthening his resolve to recover from the devastating loss of his unit. But when the letters suddenly stop arriving, Dash instinctively knows Cassie and her mother are in critical danger.
Elizabeth and her daughter are on the run from a dark and bloody past that refuses to let them go. The stakes are too high for her to fall for this dangerous man who’s just walked into her life, but now more than ever she needs help.
Saving his mate and her daughter calls Dash’s beast to the forefront and transforms the lone wolf into an alpha protector—he becomes Elizabeth’s wolf.
My Review
Dash Sinclair is a Breed but he can't shift and is in the Army and recuperating after being injured. His team had been killed during the mission that injured him. With no friends or family back home, he was surprised to get a letter from a little girl back home. But the letters end up being the lifeline he needed to fight to get better. As the little girl's letters keep coming he gets to know her and her mother and can tell that something is wrong. So when the letters stop and the private investigator he hires tells him that the little girl and her mother were killed in a fire, he loses hope. But the little girl and her mother ended up being fine, they had to fake their deaths, change their names and move on but the little girl wrote to him and let him know and asked for his help. Dash decides to retire and go after the little girl and her mother because his wolf is telling him that the mother, Elizabeth is his mate. How his wolf could tell that is beyond me but it sure made for a good storyline.
Elizabeth and her daughter, Cassie are on the run from some bad guys who want to kill them. So after faking their deaths, changing their names and going on the run again, Elizabeth is surprised to see Dash, the man that her daughter has been writing to. But she needs help in a big way and he's there to help if she will only let him. It takes a while for her to trust him, which I understood. But he has connections and is able to get her and Cassie to safety where they can form a plan and find out what's really going on.
Dash doesn't seem to think he has any friends, just people he's worked with but his friends come through is a huge way for them. They help him find out what's really going on and the story takes a huge twist from there. Once they realize why Cassie and her mother have been targeted and what they want from them, they know they have to put a stop to it. I really liked these two together. Dash and Elizabeth are great together and just what they other needs. This story made me so sad at times because my heart just broke for everything they all went through so it was great to see them find some happiness with each other.
Cassie has been talking about a fairy that talked to her and told her who she could trust, what she should do and even though her mom thought it was all make believe, the fairy gave good advice. I thought we would find out who the fairy really was but we didn't and that seemed really familiar to me and then I realized that this was actually book #3 in this series and I have already read through book 23 which was Cassie's book, Cross Breed which I reviewed here! How I missed this book for all these years, I'll never know but it was a great story. Any book that can illicit such strong emotions from me is a good book.
I give this book 5 out of 5 stars.
Posted by Mary Kirkland at 12:00 AM