Review: Bull In A Tea Shop by Zoe Chant 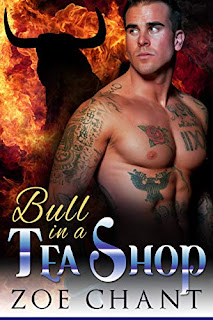 Book Description
His second chance is her salvation ...
Big, tatted-out bull shifter Maddox used to work as a thug for hire, but now he's a drifter with his old life in ruins. All he knows is that he wants to be better than he was. When he hitchhikes into the small town of Silvermine, Arizona, he's not planning to stay. But first he helps out a teenager in trouble, and the next thing he knows, the kid's alluring aunt walks into his life, and runs away with his heart. For the first time in his life, Maddox has something of his own to protect.
Blind tea-shop owner Verity has been caught up in a dangerous struggle with the town's corrupt sheriff and a greedy landowner trying to force her to sell. First Maddox saves her niece, and then he offers to help her save her business. Teaming up might be the solution she's been hoping for, but Verity has spent her life learning not to believe in happy endings.
And with a sheriff who would break every law to stop them, it'll take all his strength, her wits, and their courage to get out of this alive ...
My Review
Maddox Murphy walked away from a life that was dangerous and less than satisfying only to find himself in the town of Silvermine. He finds two teens in way over their heads and a sheriff who works for a guy trying to buy up the homes and businesses in the town and he's not being nice about it.
Verity owns a tea shop where she lives and has no plans on selling to the slug who keeps pressuring her to sell her place to him. Verity is blind and is raising her teenage niece, Bailey.
Verity is a strong heroine and the idiot buying up the land really doesn't think much of her but she shows him that she shouldn't be overlooked just because she's blind. So when Luke and Bailey bring Maddox back to her place after the first incident with the sheriff and his boss, Verity knows right away that something is up and ends up helping Maddox because he helped her niece and Luke.
Maddox is a bull shifter but he and his other half aren't getting along because of something that happened a while back. We don't find out right away what it is but it makes sense when we do. Because he and Verity find themselves in a lot of danger because of the sheriff and his boss, Maddox decides to run for sheriff which puts them in even more danger but he's doing it to help her and the town.
I think this was the first time I've read a story with a bull shifter but I really liked it. With all the danger they find themselves in, they also had time to get to know one another. Watching the romance bloom between two totally different people was a lot of fun. You wouldn't think they would be a good match but they really were.
I give this book 5 out of 5 stars.
Posted by Mary Kirkland at 12:00 AM