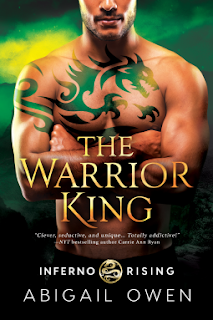 Book Description
Meira Amon is the most reserved of the phoenixes, finding computers easier to deal with than people and their messy emotions. But she wants revenge against the Rotting King Pytheios for the murder of her parents just as much as her sisters. Offering herself as a queen for their ally, dragon shifter King Gorgon of the Black Clan, only makes sense.
Just one problem…
Samael Veles worked his lowborn ass off to become the fiercest warrior of the Black Clan. He has pledged his life to protect his king at all costs. Yet somehow, in the middle of war, he took one look at a woman in a reflection and gave up his heart. When that woman turns out to be the phoenix promised to mate his king and help bring peace to their kind, he has no choice but to accept it.
Until her fire unexpectedly destroys the king after they’ve wed. Now Samael must choose between his loyalty to his clan and protecting the queen who might be his mate from his people’s wrath, one of which will unlock a destiny no one could have ever imagined…
Each book in the Inferno Rising series is STANDALONE:
* The Rogue King
* The Blood King
* The Warrior King
My Review
Everyone wants revenge against The Rotting King, Pytheios. So to Meira, it made sense to align herself to Gorgon and marry him. But things go terribly wrong and he dies after they are wed.
Samael first spotted Meira in a mirror, like he was seeing a ghost because she wasn't in the room. His dragon knew right away that she was their mate but he could do nothing since he had no idea who she was. Once he did see her again she was about to marry Gorgon so he let it go. But now he has to try and protect her, both from his people and from himself.
After Pytheios's witch, Rhiamon had been killed I really thought that would be the end of The Rotting King but I was wrong. Instead he sacrificed his own son and that of Rhiamon to bring her back to life. She was not happy and very unstable. Pytheios wasn't so sure that he could count on her anymore to bring him paranormal creatures in order to drain to give him more power to stay alive. So he and his brother came up with another plan to make sure he kept the throne of High King. This twist was great! I never would thought such a thing was possible but this series has shown that so many things are possible.
While Samael and Meira are on the run and trying to figure out what to do next, they finally give in to what they feel and realize they really are true mates. That's when they get hit with another twist that really shakes things up. The twists don't stop there and I swear one had my mouth dropping in shock. I was not prepared at all. The journey was long and the danger was great. The heartache I felt watching this story unfold was profound but I really liked the ending and am really looking forward to the next book.
I give this book 5 out of 5 stars.
Disclosure: I was given an e-ARC of this book via NetGalley but all thoughts and opinions are my own.
Posted by Mary Kirkland at 12:00 AM