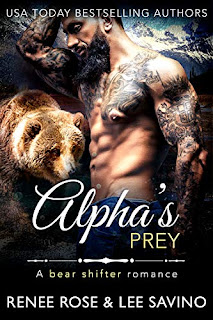 Book Description
The human thinks I’m stalking her. Maybe I am.
But I’m not the only one.
There’s something evil in these woods and it preys on single women.
I’m not about to let the sexy scientist fall into its lair.
Even if that means holding her prisoner in my cabin.
Keeping her where I can see her at all times.
Bending her to my bear’s will.
Just until the storm passes. Until her research is finished.
Then I’ll let her go.
I swear.
My Review
Caleb has been spending more time in his bear form than his human form since his mate and cub had been brutally murdered and he was the one to find them. He should be hibernating but there's a serial killer/kidnapper on the loose and another female has gone missing and she's not the first one.
When Miranda goes to the research station's cabin by herself, Caleb is fearful that she might be the next victim. Miranda is writing a paper on tree ring research and if she doesn't get the research done so she can write the paper, her funding will be gone.
Miranda brought her dog, Bear with her to the research cabin. The name of the dog made me laugh since I knew in short order there would be a bear shifter watching her and coming to her rescue, which I was right about. They meet when Miranda goes outside to gather some research but gets lost. Caleb finds her hypothermic, in the snow because her dog is barking like crazy. He brings her back to his cabin to warm her and the dog up. But when she wakes up hours later and he's sleeping inside the sleeping bag with her, she fears he might be the serial killer that the clerk at the convenience store told her about.
They end up being stuck in his little cabin for a couple of days because it's snowing and the snow is really deep. There's no way that she's be able to hike through it and get back to her cabin. He's grouchy but his bear really wants Miranda and that makes Caleb even grouchier. So while Miranda has a weird habit of talking to herself like she's narrating what's going on around her, Caleb isn't making things real pleasant for her with his gruff behavior.
The serial killer who has been kidnapping women, is actually a crazy guy who is experimenting on the women. We get a few glimpses of what he's up to during the time that Miranda and Caleb are stuck together in his cabin. And then again later.
Watching Caleb and Miranda tip toe around each other at first was fun because they both are lusting after each other. So when Miranda pokes the bear, so to speak and Caleb decides to act on list lust, these two are hot enough to melt the snow piled up around his cabin. He's all but given up on life and is pretty much just living to find the evil thing that killed his family. But Miranda is a breath of fresh air and just what he needed in his life. What happened to his family is heartbreaking but finding Miranda gives him anther chance at life.
I give this book 5 out of 5 stars.
Amazon
Posted by Mary Kirkland at 12:00 AM