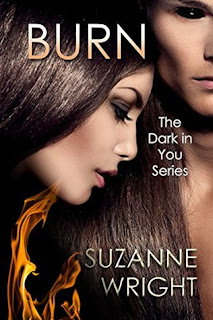 Book Description
Part of a small demon lair in North Las Vegas, tattooist Harper Wallis lives a pretty simple life. That changes overnight when she discovers that her psychic mate, or ‘anchor’, is a guy who’s rumored to be the most powerful demon in existence. Compelling, full of secrets and armed with raw sexuality, Knox Thorne is determined to claim her as his anchor, creating a psychic bond that will prevent their inner demons from ever turning rogue. The billionaire also wants Harper in his bed. She’s not so sure she wants either of those things. No one seems to know what breed of demon Knox is, only that he’s more dangerous than anything she’s ever before encountered. But he refuses to walk away. And when an unknown danger starts closing in on Harper, it seems that Knox is the only one who can keep her safe.
As Prime of his Las Vegas lair and a successful businessman, Knox Thorne is used to being in control. He’s also used to people fearing and obeying him. Harper does neither, which unexpectedly amuses him. Unpredictable, elusive, and complex, she draws Knox and his inner demon like nothing ever has. Knox is used to getting what he wants, and he wants Harper. He’ll have her, and he’ll keep her safe from the threat that looms over her. Because Knox protects what’s his. He won’t allow anyone to take her from him. Even if it will mean letting the demon inside him rise and wreak the havoc it was created to make.
My Review
Harper is a demon who grew up knowing her mother never wanted her and gave her to her grandmother. She grew up in a family of Imp's even though she isn't one. Her father only helped raise her because her grandmother, his mother made him.
Knox is also a demon but he's The Prime of his lair and a billionaire to boot. He owns a lot of land and hotels in Nevada. He was rumored to be the most powerful demon in existence, so other demons fear him.
When Harper's cousin is attacked and not able to fight, Harper takes her place in the ring. That's when Knox takes notice of her and makes it a point to meet her. But as soon as they touch, they realize they are each others anchor. Demons come in pairs, each having a psychic anchor. Finding and having that anchor prevented the demon from turning rogue.
Knox has a problem because someone is kidnapping strays from outside his lair. Strays are demons who choose to live outside a lair and not have the protection of The Prime but they also don't have to follow The Primes rules. He's not sure who is behind the kidnapping until his old friend makes noise about wanting to be the new monarch, who would hold power over all the Primes.
I loved the picture on the cover of this book and that's one of the reasons I wanted to read this. His eye just looked evil and I really thought it was cool. You can tell when the demon inside has taken over because their eyes bled black. They have inner demons much like shifters have an inner animal. There are different kinds of demons and while most of Harpers family are Imps, she is a sphinx.
This book was set in Las Vegas which I loved. Since I live in Las Vegas, I like reading books set here. When a couple of Primes decide that they want to make changes to the hierarchy and elect a monarch that would oversee everyone, the drama ratchets up all the while Knox and Harper have to figure out who is trying to kill her and why. There are several obvious prospects as to who was trying to kill her but I wasn't sure who it was or why until it unfolded.
There was a lot of drama going on in this story but we also get to watch Harper and Knox get to know one another. They were so good together. He might be a big, bad demon but he is also an insanely caring person to those who mean something to him. It was interesting to see both sides to a demon since my first thought of demon's are not how much they can care about their friends and mates.
The side characters are hilarious. Devon and Tanner are pretty much a dog and a cat demon but are actually a hellhound and hellcat, to say they don't like each other is an understatement. They made snide little jokes to each other but it made me laugh so much. I can totally see these two together even though they say they hate each other. He is always saying stuff like, "Here, kitty kitty." and she once brought him a bag of dog biscuits. How can these two not end up together? I can't wait to see more of these two.
I give this book 5 out of 5 stars.
Posted by Mary Kirkland at 12:00 AM