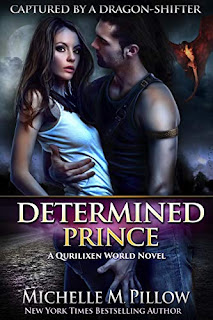 Book Description
Dragon-shifter Prince Kyran has studied the Earth people and is ready to assimilate. Female shifters are all but going extinct on his planet of Qurilixen, and his people are desperate for mates—so much so they’re taking matters into their own hands. What better place to find a mate than Earth? After all, dragon-shifters had come from there centuries ago. Surely a human female would be honored to be selected by one as fine and fierce as himself.
While on Earth, Kyran stumbles upon the most beautiful woman he’s ever imagined, singing something the natives call rock ’n’ roll. His blood simmers and he knows Eve is the one for him. But taming this feisty female is going to take much more than his training prepared him for.
My Review
Females slowly stop being born to the people on Qurilixen so they decide to open the portal and go back to Earth to find females that they can mate with. 4 males from Qurilixen go to Earth and it's Kyran that finds a female first to bring home and mate. But because things have seriously changed since the last time his people were on Earth, he and the other guys are dressed really weirdly and speak even more strangely. The guys end up in a bar where Eve is singing on stage and when Kyran spots her, he's taken with her. They end up talking but she's doing a lot of drinking because it's her birthday, so she doesn't understand that Kyran is pretty much proposing to her and in her drunken state she accepts.
The next day Eve finds herself on an alien planet with Kyran in his tent where he tells her they are now married. He makes a mess of things because he isn't very good at explaining what happened and just expects her to accept or understand somehow what is going on and that's not how she reacts at all.
Because he doesn't understand everything she says, there are some hilarious misunderstandings. But not everyone on the planet are happy to have a human there. There are two species on Qurilixen, the Draig who are dragon shifters and the Var who are cat shifters. Some of the Var made it clear that they don't want human females polluting or diluting their gene pool. I look forward to see where this series takes me.
I give this book 4 out of 5 stars.
Posted by Mary Kirkland at 12:00 AM