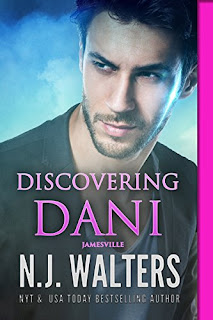 Book Description
Dani O'Rourke is no stranger to hard work. She’s been raising her two brothers alone since their parents died and she owns and operates her own business, O’Rourke Cleaning Services. Spending all her time working and looking after her family means she’s never had time for men. And if she was going to look for a relationship, it wouldn’t be with an arrogant and cynical man like Burke.
A brush with death has successful businessman Burke questioning his priorities. He’s come to Jamesville for some peace and quiet to figure out what to do with the rest of his life. Catching a woman breaking into his cabin certainly isn’t part of his plan, nor is being attracted to her after her finds out just how wrong he was about her.
Burke finds himself caught up in Dani’s family, but is there room in such a gentle woman’s life for a man as hard as him?
My Review
Dani has been taking care of her two brothers ever since her parents died. She owns her own cleaning company and is cleaning out a cabin when she first meets Burke. He thinks that she is stealing from him since she knocked over a briefcase and is putting all the spilled papers back inside when he comes into the cabin. He makes a big mistake telling her he won't call the police if she's "nice" to him. I hated this guy right away.
Burke has been on his own for a long time and he's made a lot of money for himself. But he has no friends or family and that fact hit him right between the eyes when he had an accident and only a couple of business acquaintances came to see him in the hospital. He made changes after he got out of rehab and wants a family and friends which is why he's in Jamesville. His first real run in with Dani was a complete misunderstanding that made him look like a jerk but she's still nice to him afterwards.
When Burke realizes that he's made a terrible mistake, he goes to Dani's house to apologize where she invites him in and he has dinner with her and her brothers. Her brothers are very protective of her and don't trust Burke right away. But Burke is kinda in awe of the way they all get along and react towards one another which is not something he's used to since he's never had a real family like Dani does.
Even though everything seems to be going well for the two of them, Burke once again ends up acting like a complete jerk and emotionally hurts Dani, which made me hate this guy. I really wanted her to erase his memory from her brain and find something worthy of her because his bad temper, irrational behavior and the way he treated her, like picking up and leaving without telling her a thing for over a week was more than I ever would have put up with. But they do get back together more than once and things seem to be working out for them. It ended well but I can't help think that she is going to have nothing but problems with this guy in the future and I still don't like him.
I give this book 3 out of 5 stars.
Amazon
Posted by Mary Kirkland at 12:00 AM