Book Review: Marked By a Vampire by Angela Sanders 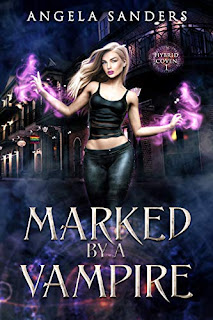 Book Description
A night of celebrating a new beginning ends in a nightmare that Grace can’t escape. When she wakes up in a strange place three days later, she realizes her life has been turned upside down. She’s been forced into a world where magic is real along with monsters of myth. The vampire who marked her is hell-bent on making her come to him—to be one of his possessions. Grace soon learns that she was born a powerful witch and with the help of some new and old friends, she learns her craft as she transitions into a vampire/witch hybrid.
It's a race against time as the crazed vampire attempts to take over Grace's mind—he’ll do anything to have her. Matthew, the hybrid who saved her life, will do anything to protect her, even if it means sacrificing his own life.
Deceit, betrayal, and new beginnings.
My Review
Grace and her friends go out to have a good time and run into vampires but they don't realize what they are until it's too late. Grace is bitten but gets away and that's when Matthew finds her and brings her back to his place. He's a hybrid and knows what's going on with her. Grace is a witch but never had any training so her powers never manifested. Now she's a hybrid witch/vampire like Matthew and needs help to keep the vampire that bit her from getting to her mind and making her do things she doesn't want to.
Matthew and his friends come to her rescue and teach her what she needs to know but the vampire that bit her isn't giving her up without a fight. Grace and Matthew have some feelings for each other right from the beginning but they don't react on their feelings for a while because of everything that is going on. I liked their romance even if it did feel a little rushed towards the end.
The story was interesting but the writing style didn't help me really get into the story and the characters weren't all that interesting. I wanted to like this but I really didn't.
I give this book 3 out of 5 stars.
Amazon
Posted by Mary Kirkland at 12:00 AM