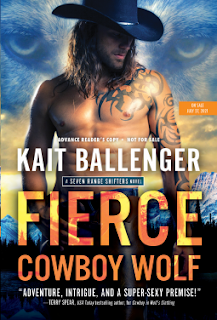 Book Description
Cowboys by day, wolf shifters by night: These bad boys are ready to heat things up in a sexy paranormal wolf shifter romance from author Kait Ballenger.
Sierra Cavanaugh has worked her whole life to become the first female elite warrior in Grey Wolf history. With her nomination finally put forward, all she needs is the pack council's approval. But those stuffy old wolves refuse to elect her unless she finds herself a mate.
Packmaster Maverick Grey was reconciled to spending the rest of his life alone. Now, having entered into treaty renegotiations with all the Seven Range clans, he needs the elite warrior vacancy filled—and fast. If Sierra needs a mate, this is his chance to claim her. But Sierra has an agenda of her own for their union, and they'll need to work together against the assassin intent on barring the deal.
For these two rivals, the only thing more dangerous than fighting the enemy at their backs is battling the war of seduction building between them...
My Review
Sierra worked hard to become the first female elite warrior for the grey wolf pack but she was denied by the council because she doesn't have a mate.
Maverick needs the council to comply with his wishes in order to do what he needs to do. But he never expected to have feelings for another woman after his mate died but here he is about to be mated to Sierra even if he only wants a business arrangement.
Their mating started out as a mutually beneficial arrangement but when Sierra asks him to tutor her in the art of all things sexual, it's hard for him to keep feelings out of the mix.
Sierra is a fierce woman and I loved that about her. She's been in love with Maverick for ages and was upset when he didn't pick her to be his mate and instead picked another female years earlier. I liked that she found out why but that didn't change the fact that Maverick is a different guy than the friend she had when they were younger. But as they get closer she gets glimpses of the boy she knew and knows that he still has feelings for her but is scared to love her which melted my heart. These two had a lot of get through in order to be a real mated couple.
On top of everything else these two are dealing with they also have to contend with someone trying to kill Maverick. I really liked the storyline and watching it unfold as we find out who was behind the attempt on his life and why. I had no idea what was really going on which was fun. This might have started out as a marriage of convenience but as time went on, they both had to admit that they loved each other but watching the trouble they had in order to get there was sad.
I give this book 5 out of 5 stars.
Disclosure: I was sent a free e-ARC via NetGalley but all thoughts and opinions are my own.
Amazon
Posted by Mary Kirkland at 12:00 AM