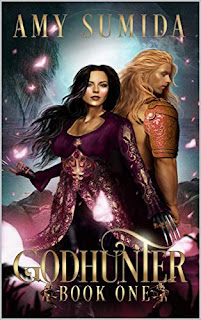 Book Description
Godhunter—what a dumb name.
Hunting implies an advantage. It speaks of tracking and skills and swift kills. That's not what I do. I'm more of a “sneak up on them when they're asleep” kinda gal. And don't give me any crap about that; didn't you catch the god part? I do what I have to do to survive. Yes, survive. I don't do this for pleasure. I'm not a crazy person. I kill gods because I don't want them to kill me. Okay, yeah, that still sounds a little crazy.
But then he showed up: eyes full of lightning, a jawline that could cut glass, and the body of a Norse god... which is exactly what he is. One of them. He's the one who gave me that stupid name. He also says he's on my side. I should probably kill him. And by that I mean that I should run away and sneak up on him later when he's asleep. But I have the strangest feeling that I can trust him. As a witch, I always trust my gut but as a woman, I suspect that this time, those feelings are coming from somewhere a little lower.
Trigger Warning: Although there is NO rape in this book, there is a dream scene with an enemy that involves consensual sex which the MC considers to be rape after she awakes. The dream itself is not violent nor does it involve force, but some readers may be disturbed by the reaction of the MC after the fact.
The Godhunter Series is a slow-build Reverse Harem Paranormal Romance series with Gods, Shapeshifters, Witches, and mythical beasts that will keep you hunting for more.
My Review
I wanted to like this book, the description sounded promising but I couldn't get into it for several reasons. I DNF'd this book at 40%. This is my very first dnf but it won't be my last I'm sure. I used to try and read the books that I started but I don't have time for books that I cannot get into and this was one of those books.
Vervain is a witch and when someone comes after her to kill her, she kills him and a god. She decides to go through the god's things and finds a book that teaches her how to do more magic. So she kills a couple of gods and gets the name Godhunter because of it.
In walks Thor, yes, that Thor and he wants her help. There are a few other gods that join them and want to change how the gods treat humans. Sacrificing humans gives the gods more power but we find out that the gods already have all the power they need so there's no need for all the killing. So Vervain decides to stay and help if she can.
Now my first problem comes when we start meeting some of the other gods. A good looking man walks in and we're told he's Indian but then this happens... " (Indian with a dot not a feather)". I actually had to read that a couple of times because I couldn't believe what I had just read. The author could have said so many things. Indian from India. Indian but not Native American. I mean, I just had a lot of problems reading the rest of this after that.
It was overly descriptive to the point where I started skipping over some of the descriptions. The conversations didn't flow and was immature at times.
And then there was Blue, the sun god who is also pretty much Dracula or the father of all vampires. After he kidnapped Vervain and she gets away, he enters her dream and pretty much mesmerizes her and tricks her into sleeping with him and letting him bite her in her dream. But when she wakes up she has real bite marks. Blue was a total creep. I love vampires but I didn't care for this guy at all.
It was so slow. I kept waiting for the storyline to pick up and things to start happening and when it didn't, I just got bored and quit. A book has to keep my attention and unfortunately this one didn't.
I give this book 1 out of 5 stars.
Amazon
Posted by Mary Kirkland at 12:00 AM