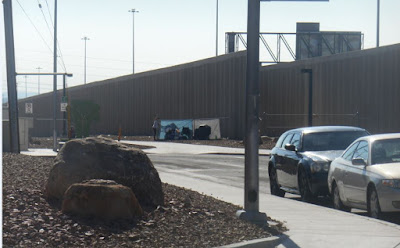 On Tuesday I noticed some of the homeless people setting up camp at the end of the street near the chain link fence. They draped sheets and blankets over the fence and had their carts and belongings on either side of it.

I enlarged the picture so you could see it better. They stayed there for a couple of days and then they were gone. I had walked down that way when I was walking Falcor and they always kept to themselves. I've never had a problem with most of the homeless people around here.

I noticed that maintenance boarded up a broken window in the now vacant apartment where the man passed away last week. It got broke out at some point. I guess they don't want anyone breaking in.
----
I was talking with a lady from the end of the street when she was out walking her 5 small dogs. Falcor had fun with her dogs. She asked if someone else had owned Falcor before because a red headed man used to walk him. I said that was my husband. She gave me her condolences about his passing last year and then told me that she and her husband moved here from Tennessee a couple of years ago. And that 4 months after they moved here, her husband was murdered down there *She pointed towards where she lives at the end of the street* I had no idea. This was the first time I had talked to her. I don't know what happened exactly, but dang.
The high this week was 108F/42C
So that's it for this week's Apartment Hell  Life! Be sure to come back next week for more.
Posted by Mary Kirkland at 12:00 AM