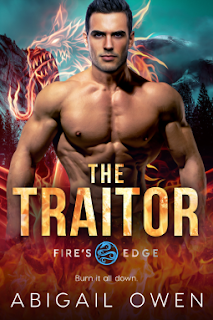 Book Description
Decades ago, rogue dragon shifter Rune Abaddon took a stand against the decaying, corrupt systems governing their people. He now uses his bad-ass reputation to protect the innocent as it all comes crashing down. But he’s pushed the limits one too many times. His hideout is destroyed, his few allies are scattered and hiding, and the Alliance has placed a dead-or-alive bounty on his head, making him the most wanted dragon in the western hemisphere.
And then the most enticing woman he’s ever met barges into his mountain, demanding an audience.
Hadyn Reece's future was ripped away long ago. The man fated to be her mate was murdered alongside her parents before Hadyn was old enough to be turned, leaving her to be raised and trained by her dead mate’s parents in the dragon shifter world. Now, the Alliance has come for the only family she has left. It’s a good thing she was raised by dragons, because the only one who can help her save them is a traitor she’d be smart to fear.
Especially when his dragon decides she’s theirs.
My Review
Rune Abaddon turned his back on being an enforcer when he realized that potential female mates were being killed when those in power decided to try and turn them against their will and mate to them dragon males who were not their mates. If a female tries to mate a male who is not her mate, she will die when he breathes his dragon fire into her. So Rune let his people and his friends think that he was stealing mates and keeping them, when he was actually keeping them safe until they could find their true mates.
When Hadyn Reece's adoptive parents are kidnapped, she does what her father had taught her to do, she went in search of Rune to get his help. Haydn had been a potential mate but her mate had died along with her biological parents before they were old enough to try and mate. His parents took her in and she's been with them ever since. So when dragon shifters come and kidnap her parents, she knows only one thing to do, get help. Rune isn't sure about her story and he's skeptical about her at first but they do finally come to an understanding and he agrees to help her. But things go terribly wrong when they go to save her parents and Rune realizes that he needs more help than he thought.
I really thought that this was going to be the end for Rune and his friends at one point but then he makes a fast about turn and decides to change tactics to make sure that their secret doesn't get out to the humans, it makes other dragon shifters from the opposing side look differently at him and this story takes a turn that I never saw coming.
I've been reading this series since the beginning and I've loved this series, the characters, the storylines, pretty much everything. But I will say that this story made my cry at one point, the heartbreak was real and deep with this book. There's no shortage of action, drama and romance, these characters come alive while reading and really draws you into the story. Rune deserved a happy ending and I'm glad he finally got one.
I give this book 5 out of 5 stars.
Disclosure: I was given an e-ARC of this book via NetGalley but all thoughts and opinions are my own.
Amazon
Posted by Mary Kirkland at 12:00 AM