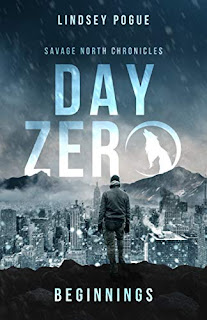 Book Description
Survival of the fittest. Those four words accompanied me into the inferno. Followed by four others. I am the weak. And knowing I deserved far worse than death, I let the fire inside me burn.
Before the fever, a deadly plan was set in motion from which a single text altered the world beyond remedy--three words that changed humanity forever. It is time.
After the Great Transformation, life in the North was miserable and bleak for those who remained. Loved ones were mourned. Survivors heard voices and could do impossibly unnatural things. Yet, amidst the fear and uncertainty, the grief and despair, Bert, Ross, Kat, and Cal found a semblance of hope.
These are the stories of those who survived the beginning.
My Review
I haven't read any of the previous books in this series  and this is book 8 so I'm sure I'm missing a few things. But this prequel read like the beginning of the series and not 8 books in because it told what happened when the sickness first came and when people first started dying from whatever happened.
Something bad happened, people played a part in that disaster and those that are left have to go on somehow. This book tells how a few of the survivors first started out in this story. It was very heartbreaking. People are dead and dying, people are taking advantage of others. Kids are alone and scared.
I have no idea what happened after this but it was an interesting look at the beginning. I'm glad I read this first because it definitely piqued my interest.
I give this book 4 out of 5 stars.
Amazon
Posted by Mary Kirkland at 12:00 AM