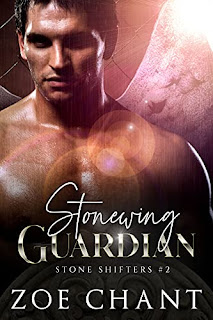 Book Description
He’s her second chance.
She’s his last hope.
After a devastating accident, archaeologist Thea shut herself away from the world. But now, there’s an incredibly hot guy in her office, with an offer that might just be enough to drag her back into the field. He’s either crazy… or an entire secret race of magical shapeshifters desperately needs her help.
Time is running out for gargoyle shifter Mace. His people are in grave danger, and their only hope is a lost Viking amulet… and the brave, smart, emotionally scarred woman who might just be his mate.
But if this is going to work, he’ll have to trust a human with his people’s greatest secret…
… and she’ll have to trust him with her heart.
My Review
Mace is looking for a magical amulet and hopes to find it before the magicians in the cloaks find it first. The magicians are after him and so he and everyone around him are in danger. Mace asks Thea to help him find this amulet and because she's an archaeologist, he thinks she's the perfect person to help him find what he's looking for.
Thea is working out of an office these days instead of doing field work because something bad happened to her and she can't go back to the dig sites yet. So when Mace asks her to help him find a magical amulet, she's not sure but she decides to help him.
Mace is a gargoyle shifter and he and his people are very secretive. But there's magical cloaked figures after him and his people. He knows some secrets about his people that these cloaked people want and they want to capture him to get them so they dart him with tranquilizers to try and capture him. But Thea and his friend Gio are thankfully there a couple of the times that the darts are able to get him and they take care of him. Mace can usually get away really fast because he can stone walk. Which means he can walk through stone, rock, pavement, concrete and he can get to other places really fast by doing this. While it wasn't explained really well what happens when he stone walks, I got the gist of it.
The magical cloaked figures come after him several times and puts Thea, Gio and others who are around him in danger. Thea doesn't want to stone walk with him after he did it with her without any warning because they were in danger and it set off a panic attack in her.
While they are searching one particular spot, one of the cloaked people find them and put them in danger once again. This guy also wants the amulet but for his own reasons and I understood why but he's still a bad guy. But the amulet finds its way to someone else that actually needs it and Mace is just fine with that as long as the cloaked magicians don't get their hands on it or him.
The secondary characters were great and we get to meet some other shifters that I would really like to get to know better. The ending was so sweet, I really loved that. I haven't read the first book but you can bet that I will be now.
I give this book 4 out of 5 stars.
Posted by Mary Kirkland at 12:00 AM