I saw the police cars patrolling my street again too. They didn't stop but it seems like every time I step outside these days I spot them in the alley, on the street or going down side streets. I think they would see more if they stopped, got out of the cars and came into the courtyards. That's where most of the drug dealing is going on and where most of the druggies are laying around or sitting in front of people's doors waiting for the drug apartment to be open for business in the morning.
--- 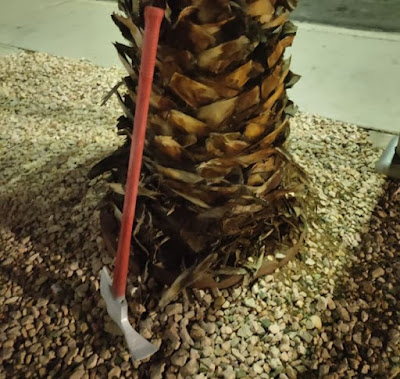 One night while my daughter was coming home from work she spotted this ax sitting near a tree outside my apartment complex. 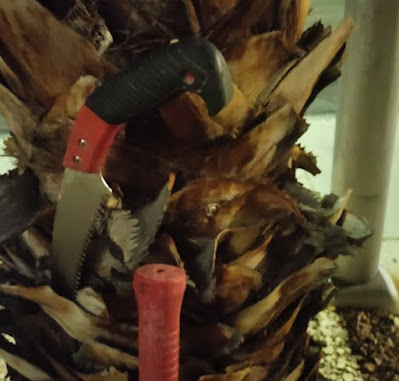 Then she noticed that there was also a knife stuck in the tree right beside it. She decided not to touch either one in case something weird was going on. The next morning they were both gone.
----
There's a new tweaker woman in my neighborhood who has been hanging around down at the drug dealers apartment. And then on Tuesday Tweaker Lady was on the other side of the chain link fence and she stops and looks at me and says, "You're big. You're huge! There will be justice." And just kept on staring at me as I walked home. o.0

She's been spotted walking down the middle of the street waving her hands and yelling at people as well as yelling at no one. I think she might be mentlly ill maybe suffering from schizophrenia.
Wednesday morning my daughter tells me that Tweaker Lady and friend were sitting in our chairs in front of our apartment making a bunch of noise. My daughter confronted then and asked them to leave and they continued to sit there making noise for a while before they got up and left. I told my daughter to wake me up next time and I will make them leave. They won't ignore me. I'll throw a bucket of water on them, I don't care. Sorry, I'm just trying to clean my chairs and didn't see you sitting there.
---
Friday morning my daughter heard gunshots close by, maybe in the alley of our apartment complex. No one ever calls the police for that because it happens so often. I didn't hear it because my bedroom AC was on and it's loud and muffles any noise from outside.
The high this week was 105F/40C
So that's it for this week's Apartment Hell  Life! Be sure to come back next week for more.
Posted by Mary Kirkland at 12:00 AM