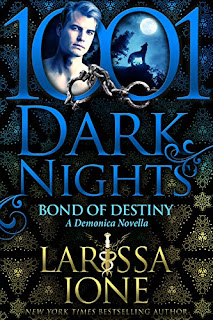 Book Description
Sold into slavery mere hours after his birth to werewolf parents, Tracker spent decades in service to cruel underworlders. Then the fallen angel Harvester transferred his ownership to a human woman who gave him as much freedom as the unbreakable bond would allow. Still, thanks to his traumatic past, he’s afraid to trust, let alone feel love. But when an acquaintance shows up at his door, injured and in need of help, he finds himself longing for a connection. For someone to touch. For someone to care.
Stacey Markham has had it bad for Tracker since the day her best friend, Jillian, was forced to hold his unbreakable slave bond. At first, the fact that he’s a werewolf seemed weird to Stacey, but hey, her best friend was married to one of the Four Horsemen of the Apocalypse, so weird is definitely a matter of perspective. Stacey knows the depths of Tracker’s trauma, and she longs to help him even as he helps her, but breaking through his walls isn’t easy. And it only gets harder when the only blood family he has, the pack that gave him away, lays claim to him…and everything he loves.
My Review
Tracker has been a slave his entire life because he was given away as soon as he was born. He's a werewolf shifter and his new master, Jillian is the nicest person he's ever known. She doesn't want to be his master but it can't be helped. So she and her mate have given him as much freedom as they can. He lives alone in a cabin built for him and watches over Jillian's cabin while she and her mate are away.
Stacey is Jillian's best friend so when she was in an accident on an icy road, she walked to Jillian's cabin but Tracker found her half frozen in the snow and brought her inside his cabin and warmer her up. Now they are stuck, snowed in together in his cabin and making the best of it.
Stacey is exactly what Tracker needed. He's not fast to trust people because being a slave he's been treated incredibly bad his entire life. Some of the flashbacks of his life made me cringe and I felt really bad for him. It took a little time for him to warm up to Stacey but she's so full of life so it's hard not to feel good around her.
These two are snowed in and even though the phone service goes in and out during the time they are together so they are able to talk to Jillian and let her know what's going on, Jillian is not happy that they are stuck together and let's Stacey know that Tracker is off limits to her for some reason. But that doesn't stop Stacey from kissing Tracker until he finds out that Jillian told her he was off limits. Being that Jillian is Tracker's master, he cannot go against her wishes. But Jillian gives her permission after Stacey makes her realize that she really does care about him and isn't there to play with his feelings.
Things look like they are going well between them until a couple of guys from his families pack come to talk to him and ask him for something. When he refuses to give them what they want, all hell breaks loose. I liked that we got to see Harvester again because she's changed and I really like her. I really liked how the action really notched up towards the end of this book and how it had such a great ending.
I give this book 5 out of 5 stars.
Amazon
Posted by Mary Kirkland at 12:00 AM