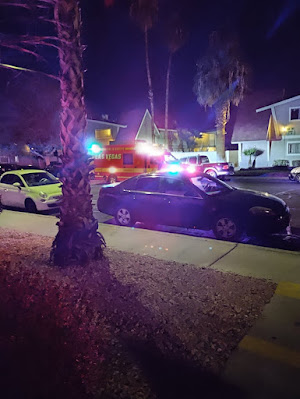 My daughter took this picture with her phone since her phone takes good pictures at night. The ambulance was right across the street from us at 10pm when she got home from work. No idea what was going on but I didn't see anyone get taken away in the ambulance.
I figured out how to download a video I took years ago that I had put on Facebook. I hope this actually works. lol

We used to call this guy Banjo Man. He didn't live here, he would just walk around and if he saw someone outside, he would stand beside them and play his banjo. Most people got used to him really fast and would let him play near them. I took this video when Banjo Man was standing near my neighbor.
----
I had a package delivered on Tuesday at 6PM but the delivery person never knocked on my door so I didn't know it was out there. I went out just an hour later after seeing the message notification and it was gone. Someone stole it. Thankfully I was able to get a replacement sent out.
---
A neighbor had someone knock on his door late one night and when he opened the door the lady opened the screen door because he didn't have it locked and pushed her way in. Then she tried staying the night and when he told her she couldn't stay, she refused to leave. After an argument, he had to physically pick her up and put her outside where she decided it would be a good idea to throw a fit and start yelling and screaming. It was after midnight so I'm surprised one of his neighbors didn't call the police before she left. This is why I keep my screen door locked at all times so people can't just try to walk into my apartment.
----
And we've all been sick for almost 2 weeks and my daughter went and took a Covid test because her work told her she had to in order to take a week off from work. Last night the test came back positive so we all have Covid. But we're all doing alright. I'm actually feeling better, we just can't get rid of this cough.
The high this week was 64F/17C
The low this week was 26F/-3 C
So that's it for this week's Apartment Hell  Life! Be sure to come back next week for more.
Posted by Mary Kirkland at 12:00 AM