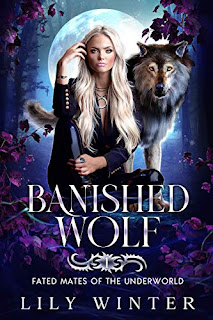 Book Description
Shifters mysteriously disappearing. A plot to open Hell. A hunky pack leader insisting she’s his mate.
Lone wolf shifter Paldon Harper lives a typical bounty hunter's life, kicking ass and taking names. So when council ask the exiled woman to help investigate recent disappearances, she's willing to experiment with the frightening magical talents that led to her banishment. But the domineering, hunky local pack leader seems determined to throw a wrench in her plans.
Dealing with demons and trolls getting in the way of her work, Paldon has no time for romantic entanglements, but Ryker is always showing at the right time. And when the Devil himself shows up with instructions, Paldon realizes she might already hold the secret to unlocking the gates of fire and brimstone.
Can she balance unfamiliar magic and the mating pull before she accidentally kick-starts the end of the world?
My Review
Paldon was exiled from her pack, her home because she broke the rules. So she and a human that she became friends with opened a PI business and Paldon is also a bounty hunter so she can afford to buy the Prada shoes she loves so much. So when the vampire king comes to her office and tells her that shifters have gone missing and the Supernatural Council thinks she is somehow the key to opening the underworld, she finds herself in danger. When Ryker shows up out of the blue and tells her she's in danger and he wants her to move in with him to keep her safe, she's not into it but does move in with him eventually. That's when her real father shows up out of the blue and let's her know that she has been lied to and she has to find out who her real mother is in order to stop the end of the world.
Not only does her father show himself but so does one of her sisters. Wrath, her newly found sister  wants to help her find her birth mother and find out why the woman wants to use her to cause the end of the world. Her father didn't help much even though he could have but they have three women that they need to check out who could be her mother. Along the way She and Ryker get closer and he's not gonna let her go this time because he knows she's his mate.
When they finally end up figuring out what's really going on, it's not what they thought it was at all. There's a pretty good twist at the end which I liked. Secrets are revealed, and I liked how it ended.
I give this book 4 out of 5 stars.
Amazon
Posted by Mary Kirkland at 12:00 AM