Book Review: Barista and the Bear by Rebel Carter 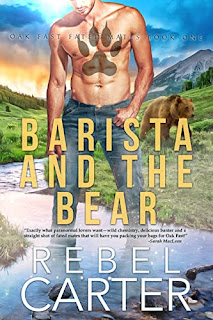 Book Description
Of all the coffee shops in the world, he just had to walk into hers…
In Oak Fast, there are mates and then there are fated mates, and fate just delivered Teresa Ruiz’s fated mate to her doorstep, er, coffee shop. After losing Aunt Mary, the center of her world, Teresa made work and the people there her life. They are her heart, but in the quiet moments Teresa knows it's not enough—even if it is safer, which is all she longs for. After all, safety is key in a world full of magic, shifters, and the fey folk.
When Cash Strongheart, her fated mate and all around giant pain in her ass, appears claiming her as his mate, it’s anything but magic. Determined to do things her way, Teresa refuses the bear shifter.
Will Teresa learn to trust the magic of mates? Can Cash prove that for all the risk, life with a fated mate is just sweeter? Find out both in the first book of the Oak Fast Fated Mates Series! This is a sweet, whimsical, and grin-inducing PNR shifter romance set in a small town with plenty of found family vibes, smart-mouthed heroines, magical realism, and cinnamon roll heroes.
My Review
Teresa was heart broken when her Aunt Mary passed away and now she feels a little lonely even though she has the people she works with at the coffee shop.
Cash knows as soon as he spots her in the coffee shop that Teresa is his fated mate but she wants nothing to do with him at first. All of her friends are very protective of her so he has to show them that he's a good guy before they will trust her with him.
Teresa grew up thinking she was human but once she and Cash start getting to know one another, he tells her something that she can hardly believe. He's a bear shifter so he can smell that she is more than just a human. She wants to take things slow and get to know him but because she's fighting the bond between them, she and Cash start to have weird symptoms because magic will not be denied. So she agrees to bond with him because she really does like him.
The magic between them makes itself known and at that point it's hard for Teresa to keep things slow and stop herself from falling for cash.
This was a great shifter, fated mates story. It was also a quick read because it was a novella but we got an entire story and I didn't feel like I was missing anything.
I give this book 4 out of 5 stars.
Amazon
Posted by Mary Kirkland at 12:00 AM