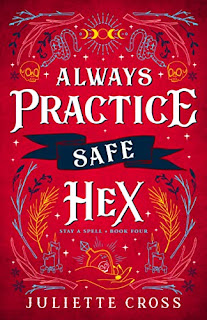 Book Description
There's a reason no one messes with a grim...
Livvy Savoie is a people person. Not only does she have the magical gift of persuasion, but her natural charisma charms everyone she meets. She hasn't met a person she didn't like. Until her annoyingly brilliant competitor walks through the door. No matter how hard she denies it, loathing isn't the only emotion she feels for him.
Grim reaper Gareth Blackwater is rarely, if ever, moved beyond his broody, stoic state. But the witch he's partnered with in the public relations contest is destroying his peace of mind. He's convinced that the flesh-melting attraction he feels for her is merely her witchy magic at work.
But forced proximity proves there is more than magic sparking between them. Livvy learns this enigmatic grim's abilities are beyond any supernatural she has ever known. And when Livvy becomes the obsessive target of a dangerous warlock, Gareth proves just how powerful he truly is. Because no one is going to hurt his Lavinia.
*Warning: Contains attempted sexual assault and violence (on and off the page).
My Review
Livvy is a witch and is in the running and hoping to win a PR contest. She and the two other people who are finalists have supernatural causes that they hope will get the funding they need to help their cause.
Gareth is a Grim Reaper and since they are a very secretive people, no one really knows much about them and their powers.
Livvy and Gareth start off as enemies even though they both find the other attractive and it doesn't help that Gareth puts off an aura of magic that makes people around him feel frisky or want to do things they might not normally want to do. So Livvy is always feeling attracted to him because of this. Livvy finds out that Gareth is also a telepath when he accidentally let's a fantasy of the two of them slip from his mind to hers, she intrigued and shocked at what she sees.
As these two end up spending more time together working on their cause, they realize that they don't find the other as irritating as they thought. Gareth is exactly what Livvy needed even though she didn't know it. Who would have thought that under that introverted, grumbly exterior was a sexy, dominant, gentleman who would totally rock Livvy's world.
I've been reading this series from the first book and this is definitely my favorite book so far. We learn more about the Grims and their powers. But the courtroom scene was amazing! We learn more about Grims when they are all in the courtroom and so do some of the other characters. This book gave us a look at the other couples and updates on their lives which I loved. Plus we see who might just become a couple in the future and I'm really looking forward to that book. I have been looking forward to this book and it did not disappoint at all.
I give this book 5 out of 5 stars.
Amazon
Posted by Mary Kirkland at 12:00 AM