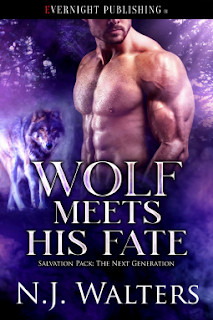 Book Description
Orphaned at birth, Jesse is raised in the Louisiana swamp by powerful witch Lottie Broussard. Hated by her father and shunned by the pack that should be hers, she is forced to run for her life after Lottie’s death.
Searching for his life’s purpose, Aaron LaForge has left his pack and is living on a farm in West Virginia.
When their paths cross in a local bar, he sees it as fate. At first, he only wants to help but quickly realizes she’s his mate. Jesse isn’t ready or willing to trust anyone—let alone a male wolf. But Aaron is as stubborn as he is convincing. As their relationship heats up, the dangers around them mount. Can their love survive their fight to stay alive?
My Review
Jesse's mother was an unmated female who got pregnant and her pack turned their backs on her. The father was mated and already had two daughter's but wanted a son. So when her mother went into labor and gave birth by herself to a baby girl, she knew the father would kill them both. But her mother knew she only had a little while to live because she was bleeding to death, so she got them both in a boat and headed to where the witch lived. She got Jesse to safety right before she died and Lottie, the witch raised the baby herself. She kept her safe, knowing that the father would kill her if he ever found out about her. Jesse's parents were both werewolves so she is too.
After Jesse was grown, Lottie passed away and her life is thrown into danger since she no longer has Lottie's power to keep her safe. While she's on the run for her life and her father and his flunkies are hot on her tail, she comes across Aaron who is also a werewolf.
Aaron can sense that Jesse is a werewolf but she flea's when she notices him and he doesn't understand why she's so scared of her own kind so he goes after her. Once he catches up to her he offers to help her for the night and after some convincing, she takes him up on the offer. When he finally learns from her what she's running from, he's more than a little angry that she's having to deal with this and he offers to help her but she doesn't want to get him involved and possibly killed. But he's persistent and she wants trust him but it's really only after the bad guys somehow catch up with her and put both of them in danger that he takes over and gets his father involved who happens to be his pack's alpha.
I loved Jesse, she's a fighter and tough as nails. She's really been on her own most of her life even though Lottie raised her. But she didn't have her family or pack around her and she's had a hard life knowing that her own father wants her dead. Aaron is such a wonderful hero. He's tough when it's called for but caring and gentle when he knows Jesse needed it.
I liked the ending and how they dealt with the problem. I'm having a good time with this series so far.
I give this book 5 out of 5 stars.
Amazon
Posted by Mary Kirkland at 12:00 AM