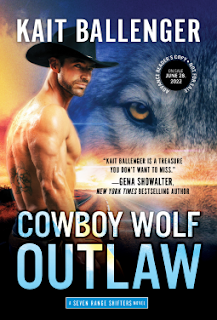 Book Description
Grey Wolf assassin Malcolm Grey is set on revenge, and no one can stand in his way. With the pack facing their most challenging battle yet, his mission is simple: locate the perpetrators and destroy them. Malcolm will do anything to keep his pack safe, especially when sassy, southern belle Trixie Beauregard makes a proposal he can't resist.
Trixie knows a few things about the dangerous cowboy sitting at her bar. One, he's a wolf shifter. Two, his wolf pack is in jeopardy. And three, despite all his growling, this dark-eyed cowboy wolf wants her. But Trixie has problems of her own, and she knows better than to run with the wolf. The smart thing to do would be to stay away. Too bad she's always had a taste for trouble...
My Review
Malcolm is a wolf shifter and executioner for his pack. He just lost his mate, Bo and is still grieving. Malcolm is also bisexual which makes sense later on when we realize why he's so antagonistic towards Trixie in the beginning because he feels something for her. But the way he treats her got on my nerves more than once. Trixie is a witch and a bartender but Malcolm pretty much sees her as a human since she's not a shifter and he doesn't want to get involved with a human, so his feelings are being pulled in several different directions.
When Trixie overhears a plot against Malcom's pack, she goes to him and tells him what she heard and asks for his help since she's now in danger. Trixie's boss has something over her and uses it to his advantage. There's much action as the vampires are out to get Malcolm's pack and they have to find a way to win the fight.
I've been reading this series for a while and liked this book but even though you could read this as a standalone, it would make much more sense to read the series in order because there are so many characters and storylines going on. I liked this story but the romance fell short for me. Trixie was great but Malcolm didn't feel like he really wanted to be with her and it showed but for a fated mates story, Malcom's attitude was less than thrilling for most of the book.
I give this book 3 out of 5 stars.
Disclosure: I was given an e-ARC via NetGalley but all thoughts and opinions are my own.
Amazon
Posted by Mary Kirkland at 12:00 AM