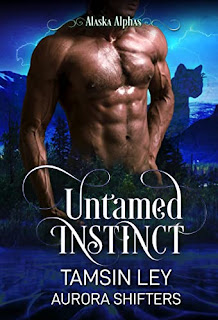 Book Description
An outcast from his pack
Born to a family of wolves, mountain lion shifter Adrian Stone has never fit into the shifter community. He's resolved to live out his days alone, prowling the Alaskan wilderness and hunting down rogues. When he rescues a stunning, determined human who smells like catnip and makes his inner animal purr, he's shocked, because his mountain lion insists she's his mate - even though she claims to be a witch...
A witch without magic
Darcy Mae is determined to join her aunt's coven and make up for her mother's mistakes. All she needs is one more ingredient for a potion to cheat the coven's test. But a grizzly attacks her while she's searching for herbs, and her mountain lion rescuer transforms into a man with rock-hard abs and golden eyes she can't resist...
Witches and shifters never mix, and Darcy is terrified the coven will drive her away. But the coven isn't her only concern. The local shifters believe the rogue outbreak is due to witchcraft.
And Darcy is the perfect target.
Reader note: A reclusive shifter, a wanna-be witch, and a whole lot of hot and steamy purring. Intended for mature audiences.
My Review
Adrian and Darcy meet while she's in the wilderness picking herbs for a potion she's wanting to make to trick the coven into thinking she can be what they want. But she gets attacked by a bear shifter and Adrian comes to her rescue. Adrian has to kill the bear because it's a rogue shifter that is sick and went after a human, it's what he does.
Adrian brings Darcy home because she's twisted her ankle but otherwise is fine. He checks on her later and brings her the herbs that she was looking for because his mountain lion keeps telling him that she's their mate. He's a shifter and she's a witch so he's not sure how they could be mates and he doesn't have a pack because he likes to be alone. He and his family don't talk because they are a different shifter than he is and they sent him away when he was younger.
There are some rogue shifters making problems and they think witches are to blame for the problems. So because Darcy isn't a very powerful witch and she was there when Adrian killed the bear shifter they seem to blame her for what's happening. There's some danger for both her and Adrian and he decides to go home and talk with his family for the first time in a long time which I really liked because they needed to talk after everything that happened. His family are a pack of wolf shifters but because of some mixed breeding in his family's past he was born a mountain lion and they tried to help him but he thought they wanted to get rid of him. It was interesting to read how he came to be in a pack of wolves.
I liked the ending and plan on reading more of this series.
I give this book 4 out of 5 stars.
Amazon
Posted by Mary Kirkland at 12:00 AM