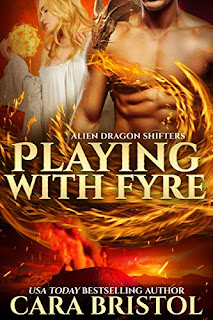 Book Description
Will a forbidden love forged in fyre bond them or destroy them?
Former Secret Service agent Henry Winslow comes to planet Draco to help a friend. He intends to return to Earth, but when he encounters a mysterious woman in bridal white, something about her grabs him and won’t let him go. His infatuation is crazy, futile. She’s an alien dragoness, a priestess, and possibly literally divine. To pursue her would be playing with fyre.
After a devastating loss, dragon-shifter O’ne seeks vengeance at the Temple of the Eternal Fyre. Unexpectedly, she is exalted to priestess and bonded to the sacred flame, transforming her life to one of duty and devotion. Then Henry arrives, and the mostly human man awakens her secret yearnings. To succumb to her taboo desires would be playing with fyre.
Surrendering to forbidden temptations, Henry and O’ne soon will discover when they play with fyre they’re going to get burned.
Playing with Fyre is the heart-stopping, fiery conclusion to the Alien Dragon Shifter alien romance trilogy.
My Review
Henry is a former secret service agent that meets O'ne and doesn't realize that she's the priestess of Draco. Draco is the planet the alien dragon shifters live on and while they are somewhat friendly with Earth and the humans, not all of the dragon shifters like humans. Draco is soon going to be impossible for the dragon shifters to live on so they have been looking for a new planet and when they find one, a few humans put up a fight over it because of something on the planet that could make them a lot of money. This just makes the dragon shifters dislike humans more. But O'ne feels something for Henry even though she shouldn't. They know that they only have a few days together and after that Henry will be going back to Earth and O'ne will have to go back to being the Priestess which is a full time job.
But more humans make trouble on the new planet and Henry has no way to get home after all the ships are stopped from coming to the new planet or going to Earth. O'ne knows that she isn't supposed to have a mate and a human is even worse. Her people will never accept that but she's been The Priestess for over 10,000 and she thinks she is due for something for herself even though she knows deep down this will never work, she can't stop herself from seeing Henry because the pull and attraction between them is strong.
I've read the first two books in this trilogy and really liked them. I don't know why it took me so long to read this last book in the trilogy because it was really good. I loved the ending and had no idea what would happen but I loved the ending.
I give this book 5 out of 5 stars.
Amazon
Posted by Mary Kirkland at 12:00 AM