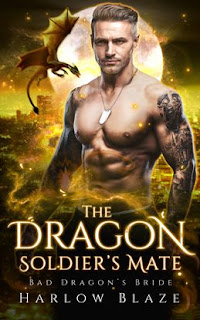 Book Description
Blackmailer threatening to murder you? Bad.
Accidentally sleeping with your boss—the dragon shifter doctor who’s way too old for you? Somehow worse.
Nadine
Nadine is a simple girl with a simple plan. Kick ass in her new job and find a man who can make her scream. After a wild encounter in a shifter nightclub, she’s got part B locked down. But becoming a nurse for the Seattle dragons attracts dangerous attention. With her family’s safety under threat, Nadine has one choice—selling out her boss.
There’s a teeny problem.
When she shows up for her first day, Doctor Axel looks very familiar. It’s hard to concentrate on spying while crammed into an office with a certified silver fox. Especially when the stern dragon shifter ordering her around did bad things to her last night. And she’s in more trouble than she thought.
She forgot to take her pill.
Axel
Axel is never going to a nightclub again. One night off from being a grumpy old man, and a pretty young thing ruins his damn life. He should have known better. Despite her firecracker nature, Nadine is human. Small. Delicate. Fragile. He needs her out of his infirmary before she gets hurt in a way that even a doctor can’t fix. But trouble brews among the cold-blooded dragon shifters. And his nurse has a target on her back.
Her innocence calls to his need to protect. Her delicious scent and fertile body call to something much darker. His inner beast doesn’t care that Axel won’t let Nadine into his life. It craves her in a way that threatens to bring about a repeat of his worst nightmare. Axel will die before he lets his filthy instincts knock her up. Getting a human pregnant will only end in tragedy. Again.
My Review
Nadine lands a new job at a doctor's office. Things seem to be looking up for her until an unruly dragon decides to blackmail her into telling him about her new dragon boss's clan. If she doesn't cooperate he's threatened to hurt her disabled mother. Nadine visits a shifter club and finds herself flirting with a handsome dragon shifter. They end up getting together and they both think that's the end of it, no big deal they had a one night stand. But when she walks into work the next morning, her boss is the guy she met in the club the night before and he doesn't want her there.
Axel doesn't want to get into a relationship with a human because he doesn't want to lose another family. So when he recognizes the woman from the night before, he just wants to get rid of her. When she pleads her case and just asks for a little time because she needs the job and lets him know they can forget about what happened between them, he agrees. But the pull he feels towards her is too strong and neither one of them can stop the sparks that fly between them.
When she puts herself in danger, Axel will stop at nothing to make sure she is safe.
I loved this story and this series. I am hoping to see some of the secondary characters get their books as well because they are intriguing and I want to get to know them better.
I give this book 5 out of 5 stars.
Disclosure: I received an e-ARC from Booksprout but all thoughts and opinions are my own.
Posted by Mary Kirkland at 12:00 AM