This is a weekly blog post that I'm calling Apartment Hell  Life. I've mentioned a few times some of the crazy things that go on in and around my apartment complex in the past 23 years that we've lived here and people keep telling me I should write a book. But instead of a book, I've decided to share the crazy things that have happened in and around my apartment complex in the last 23 years here in a weekly blog post.
----
Last Saturday night the police were outside my place pointing an assault rifle (My brother said it was an AK47) while walking around because someone was shooting off fireworks and someone must have called in a shots fired to 911. The police asked my daughter if she heard any gun shots when they saw her outside and she even told them it was just fireworks. But they were walking around my street pointing their flashlights and guns into parked cars and into the stair wells across street at people's doors as they were checking behind bushes, cars, around corners and down the street. They had their guns drawn the whole time. My camera doesn't take clear pictures at night and I wasn't about to start flipping flash bulbs at the police as they are on alert and have their weapons drawn. Nope.
---- 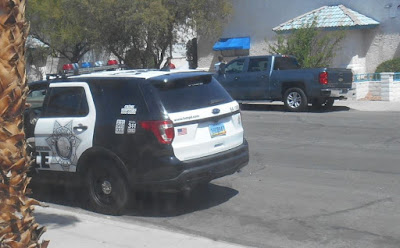 I was in my room and just happened to look out the window as I opened the curtains and of course there was a police car right there. I took a look in my courtyard and they were at the apartment directly across from me. They didn't stay long so I don't know what happened.
--- 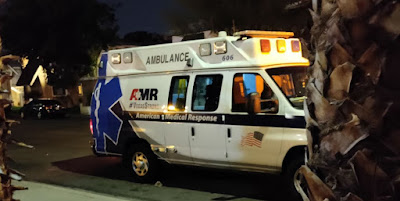 And to further the discussion from last week, my daughter spotted an ambulance in front of my complex and snapped a picture for me. This time it's one of the white AMR ambulances. Last week there was a red Fire Rescue Ambulance. We also have blue ambulances here from a privately owned company but I hardly ever see them. I didn't see who was taken in the ambulance this week.
So that's it for this week's Apartment Hell  Life! Be sure to come back next week for more.
Posted by Mary Kirkland at 12:00 AM