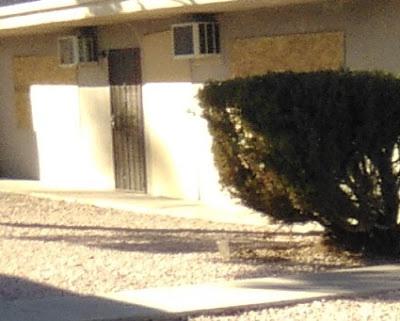 The 2 end apartment in the building across from me have been vacant for a while and one of the apartments used to have a board on the door as well as the window. But then maintenance started working in there and the floors were being replaced and the walls were being painted so they left the board off the door I guess thinking that the security door would be enough to keep the crackheads out.
They were wrong. People broke into the apartment after they had worked in there for days. Me and a couple of other neighbors got sick of seeing the crackheads freely walking in and out the door so we emailed the manager on a Wednesday. They didn't respond to any of us and didn't send maintenance out to kick them out and cover the door with a board until Monday.
A few days later my daughter saw the same crackheads slithering through the bedroom window of the same apartment. Me and my neighbors decided not to email again and instead let the crackheads tear the place up in the hopes that the hit in the pocketbook of the management company when they have to fix everything that the crackheads break in there and re-paint over all the graffiti that will obviously be there will teach them to board up the windows as well.
I mean, the residents who emailed the manager didn't even get a, "Hey thanks for letting us know" or anything. No response at all.
----
For weeks now the guy 2 doors away from me *Bam Bam* has been slamming all of his doors inside and out. He slams his door and screen door. He will stand there and slam it several times sometimes. We can hear him slamming his bedroom door over and over inside his apartment. He points his bluetooth speaker outside and plays music for the courtyard and laughs maniacally. He used to say hi when he saw me or my daughter, now he just stares all crazy eyes half the time O.O.
This week has been especially bad. He's been slamming either the bedroom or the bathroom door repeatedly in a row all night long. One of my other neighbors was talking to us about it the next morning. He said that when he did it around 8 times in a row that is scared the crap out of him because it was loud through the walls and kept waking him up. The guy is 2 doors away from me and I can hear it through the walls really loudly. That gives you an idea how hard he is banging this door shut over and over again.

My daughter walked by one day while he had his blinds and door open and saw he was just pacing back and forth in his kitchen talking to himself. Tuesday night he came and sat down next to my daughter outside and was talking normal like he used to for a minute and then told my daughter the government has tapped his phone. Then he started making weird hand gestures and said he doesn't like his fingers. Fingers! He was acting very paranoid too. So I think he might be schizophrenic and is either off his meds or is never took meds for it.
We thought about the calling the police but the only thing they will do is come do a welfare check on the guy. The noise won't actually stop and we are afraid if the cops show up it will make him mad and he'll do it even more or he'll become even more paranoid.
Then Friday night he threw bottled Jalapeno peppers all over the sidewalk, lined hotdogs by his door and tossed a flat of water bottles out into the courtyard. 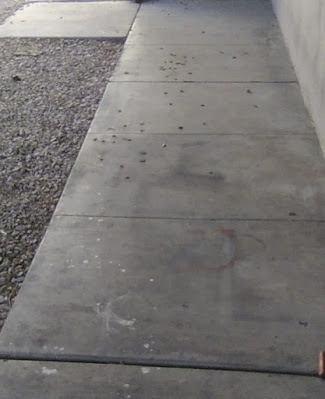 I had to wait until the next morning to get pictures. But there are jalapenos all over the sidewalk in front of his door. 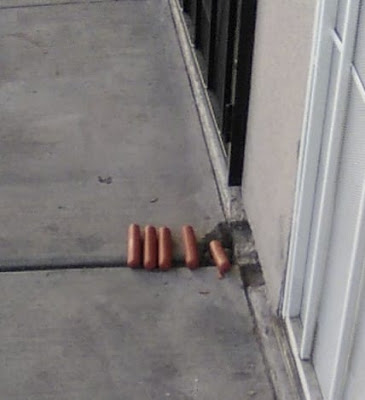 And here are the hotdogs he lined up next to his door. The water bottles got picked up soon after he threw them out in the rocks. Drug dealer and Jessica (who I've talked about before) gathered up the water bottles and took them back to drug dealer's apartment. I have no idea what he was thinking but he came outside and was yelling and screaming when he threw all this stuff outside. And yes, I have nicknamed him Bam Bam.
----- 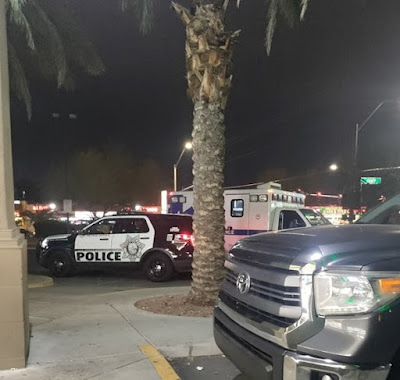 Someone I know at the Dollar Tree just down the street took these pictures. Last week a woman walked into her store and told her she was depressed and felt like killing herself and others. So my the worker asked her if she wanted her to call for help and she said yes because she was thinking of killing the worker and the other people in the store. So she called and told them that. While they waited the worker brought out a chair for her to sit on and bought her some candy and they waited. The worker called 2 more times over the next 2 hours. The operator just kept telling her they were busy. It took 2 hours for the police and an ambulance to show up but they finally did.
---
Covid Update:
We're feeling much better. I think we're over it now.
The high this week was 66F/18C
The low this week was 38F/3 C
So that's it for this week's Apartment Hell  Life! Be sure to come back next week for more.
Posted by Mary Kirkland at 12:00 AM